Thijl has become more than anyone could have thought!

After the first couple of shows, word got out about our performance… Multiple four-star reviews in national newspapers and raving audiences. Within a few days, the remainder of the tickets to ALL shows were completely sold out.

The experience was quite overwhelming: cast, crew, soloists, choir members, orchestra, costume designers, make up artists, volunteers; everyone KNEW that this was a special time. And now that it has finished, we are all enjoying our summer knowing we put on an opera that was absolutely unique. On grounds with military roots, next to the National Military Museum we performed a piece of music theatre written by a man who wrote this just before World War II. He took it wherever he went, kept it with him while he was hiding. And now, almost 80 years laters, we proudly (and loudly) put his vision of fighting for fairness, honesty and freedom into the world. That is magic, plain and simple.

I, too, will enjoy the summer. A well-deserved break before going back to London to finish my second year of the Vocal Studies Master at the Guildhall School of Music and Drama. But I’ll keep this wonderful Dutch music in my heart and mind for a long time. 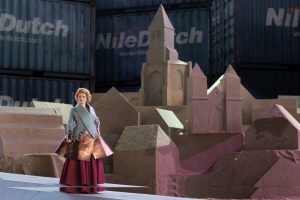