As an intensely authentic singer/actress Irene is quickly accumulating new roles. In June 2021 Irene will sing the Fremde Fürstin in a Dutch adaptation of Rusalka – Dvořák with Opera Compact. In August 2021 she’ll perform Santuzza in Cavalleria Rusticana – Mascagni with Opera op ‘t Hogeland.

In 2020 she was a part of the cast of Ritratto by Willem Jeths. Commissioned by the Dutch National Opera of the Opera Forward Festival 2020. She was to make her role debut as Santuzza with the Utrecht Student Choir and Orchestra, as well as her role debut as Fiordiligi in Così Fan Tutte – Mozart with Hurn Court Opera. Unfortunately COVID restrictions made this impossible.

Irene has won the Euregio Vokalwettbewerb and the Open Podium Doetinchem. Ze has won the Audience Prize during the Chartered Surveyor Prize and received an Encouragement prize during the Prinses Christinaconcours. She was a finalist in de Susan Longfield Prize, Zangconcours Doorwerth and Hurn Court Opera Prize, and semi-finalist in the Mozart Singing Competition and  Händel Competition.

Irene is proud to be supported by the VandenEnde Foundation, VSB Fonds, Prins Bernhard Cultuurfonds, Fundatie van Renswoude and ArtPitch 038. 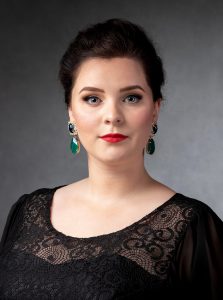